Summary: Nanette O’Hare is a good girl. She’s been a great student, star athlete and loyal friend with her future mapped out for as long as she can remember. When her favorite teacher gives her a copy of The Bubblegum Reaper, an obscure paperback with a cult following. She seeks out the mysterious author, who lives near her in suburban New Jersey and her friendship with him changes everything. Questioning why she just goes along with everyone else’s idea of who she should be, Nanette stops it all and embarks on a new adventure: Finding out who she is on her own terms. Rejecting expectations, falling in love and leaping wildly into possibility, Nanette begins to author her own story instead of following the plot that has been written for her since before she even had a say in the matter. But life isn’t a fairy tale and sometimes there are sad and serious consequences for rebellion.

Matthew Quick is one of the best writers of mature young adult fiction working today and he maintains his track record with this new book. With characters so real you feel like you know them already, Every Exquisite Thing is a terrific choice for anyone who wonders about the ‘whys’ behind all the rules young people are expected to follow. While Nanette may not exactly be a role model, she just might inspire you to think a bit more deliberately about your own choices and the path you choose to walk.

Who will like this book?: People with inquisitive, curious minds who like to ask questions and find unexpected answers. Readers who like stories with unique and witty protagonists. Anyone whose life has been changed forever by a book.

If you like this, try this: Rats Saw God by Rob Thomas. Forgive Me, Leonard Peacock, also by Quick. A non-fiction book about going your own way (with darker results), Into the Wild by Jon Krakauer. 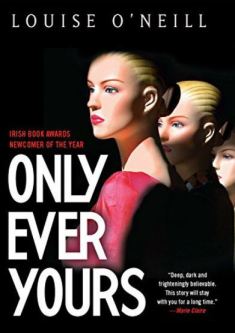 Title: Only Ever Yours

Summary: frieda and isabel are eves that have been best friends almost since they were created. Now, at age 16, they are in their final year of training at their isolated academy, both near the top of the class and sure to be selected as companions of the Inheritors – the boys who are born on the outside. The girls have been working towards this goal since they were designed – refining their beauty, maintaining their perfect figures, and learning how to cater to every whim of the men who control the world. Each year, three ‘eves’ are created for each boy born on the outside and those who are not chosen as companions will live the rest of their lives as concubines – set aside for male pleasure only, or as chastities – those considered so undesirable that they remain forever training future eves.

Even the idea of living as anything other than a companion horrifies frieda, so she cannot understand why isabel has drifted away from her during such a crucial time when they are so close to graduation. What’s worse is that isabel seems to have given up her top position – gaining weight rapidly and dropping off the weekly rankings of the eves entirely. As the other eves jockey for position and the introduction of the Inheritors – who will make the decision about their fate – looms, frieda is desperate to hold on to her future in a world where all that matters is your beauty. Can she face this world alone, without isabel’s friendship and support? Or will she be left behind to endure the cruelty of the eves, chastities and men?

This is a gripping dystopia that takes our modern obsession with physical perfection to a horrifying but all-too-plausible end. The sheer brutality of the world created by Irish author O’Neill will be challenging for some readers to engage with, but for those who are interested in dark social horror stories will find much to think about in these pages. It might make you angry, but you won’t soon forget this book and it just might make you look at our world a bit differently.

Who will like this book?: This is an intense book recommended for mature, experienced readers only. People who are interested in feminist theory, or who like to engage in philosophically- or morally-based dystopian ideas. Readers who like books that will keep them up at night, thinking and thinking…

If you like this, try this: The Handmaid’s Tale by Margaret Atwood. The Wither series by Lauren DeStefano. The Selection series by Kiera Cass.

Summary: In 1766, Billy Marvel, survivor of a terrible shipwreck that claimed the life of an entire crew of sailors, including his brother, lands in London. He finds work in a theater and becomes the founding member of an acting dynasty that would span generations and centuries until it fell into ruin. All that remains of the legendary family is their strange and mysterious mansion in London. Decades later, young Joseph Jervis flees his country boarding school in search of his best friend who has moved to the city. Lost and alone, he calls upon his reclusive uncle Albert, who lives in the incredible and bizarre home that once belonged to the Marvels. Albert has no time or patience for Joseph, and he lives by very strict and strange rules about what can be touched, moved or used in the house. With the help of the girl next door, Joseph is determined to discover the secrets of the house, the truth about Marvels and reasons why his uncle seems so peculiar.

This is another masterpiece from Mr. Selznick – author of The Invention of Hugo Cabret, which was a past One Book One Town title (so yes…we might be a bit biased!) – that takes an unusual artistic artifact – in this case, the Severs house in London, to tell a universal story of love and connection. The history of the Marvel family is told wordlessly and the story of Joseph and Albert is expressed in words, with both tales twisting and spinning their way together for a satisfying and emotional resolution that will stick with you for a long time. This is a book full of surprises and you’ll want to share it with everyone you know.

Who will like this book: Other than everybody? Fans of graphic and illustrated fiction. Artists and actors. Readers who like mysterious stories and characters, but not crime stories or creepy thrills.

If you like this, try this: Anything else by Brian Selznick. (You’ve read Wonderstruck and The Invention of Hugo Cabret already, right?!) The London Eye Mystery by Siobhan Dowd.

Summary: Jack has always been a curious boy. He has always been drawn to the abandoned house in his neighborhood and one night, when he discovers that it is lit from within, he finally summons the courage to step inside. What Jack finds surprises him: thirteen candles, thirteen chairs, and twelve very different people who have gathered to share their stories. The thirteenth chair is for Jack. As each speaker concludes their tale, they blow out their candle and the room grows darker…and Jack must wait his turn.

These short stories are perfect for the spooky season – full of chills and surprise twists and turns. This is a great introduction to horror and ghost stories for younger readers who are interested in this genre. Just don’t read these tales before you go to bed for the night!

Who will like this book?: Fans of short stories. Fans of ghost stories. Readers who like tales that are creepy, but not ‘can-never-sleep-again’ terrifying.

If you like this, try this: The Ghosts of Kerfol by Deborah Noyes. M is for Magic by Neil Gaiman. If you want something even more horrific, mature readers can check out Slasher Girls and Monster Boys, edited by April Genevieve Tucholke.

Summary: Kamala Khan is an ordinary girl living in Jersey City. She goes to school, hangs out with friends and fangirls over pretty much everything, including her favorite hero, Captain Marvel. She does her best to be a good daughter to her strict parents, as well as a faithful Muslim. But one night, she disobeys the rules to sneak out to a party, when something impossible happens: A strange mist drifts across the city, rendering everyone unconscious. When she wakes up, Kamala discovers that like her hero, she has superhuman (or, Inhuman) abilities – she can shape shift and even heal herself! Calling herself Ms. Marvel in homage to her hero, Kamala decides to use her new powers to protect and serve her community.

To say this is a groundbreaking comic is an understatement: This is the first ongoing storyline to have Muslim headline character. Kamala’s heritage is skillfully woven into the story as she tries to balance being a good and respectful person while discovering the full scope of her sometimes-scary new abilities. She is diligent and brave, even when facing dangerous situations, horrifying villains and potentially-embarrassing run-ins with legendary heroes. She is also lighthearted, silly and headstrong – an ordinary girl with extraordinary powers. This series, of which three collected volumes are now available, are perfect for summer reading. Funny, bold and heartfelt, the story of Kamala Khan is not to be missed.

If you like this, try this: The Hawkeye books by Matt Fraction, which also spend time with a superhero going about their ‘ordinary’ life. Nimona by Noelle Stevenson. Hereville: How Mirka Got Her Sword Back by Barry Deutsch.

Title: The Ghosts of Heaven

Summary: “My new hypothesis: If we’re built from Spirals while living in a giant Spiral, then is it possible that everything we put our hands to is infused with the Spiral?” Maximillian Cohen in Pi

The spiral is an ancient shape, found in prehistoric art across the globe, in nature and even in our own DNA as a helix. It is that shape and the meanings hidden in it that unite the four parts of this book by Printz Award-winner Sedgwick. A young girl, longing to be chosen to create magic for her tribe of nomadic hunters, scratches spirals into the ground even though she is forbidden to. Another young woman, thought to be a witch, sees spirals during her trials, even as her world comes crashing down around her. A doctor with secrets befriends his patient, a poet living in an insane asylum who cannot bear to even look at a spiral because he knows its secret. Finally, in the distant future, a man races against time trying to save the ship that will colonize a new Earth incomprehensibly far away from ours.

How these tales connect to each other is the joy of reading this unique book. Readers can choose to read the book from front to back, or in any order they choose. It is thought-provoking and beautifully written. This is a set of stories you will want to take your time with because you won’t want to miss a single word.

If you like this, try this: The Ghosts of Kerfol by Deborah Noyes. Midwinterblood, also by Sedgwick.